ModUcom Works with Oracle and Stancil 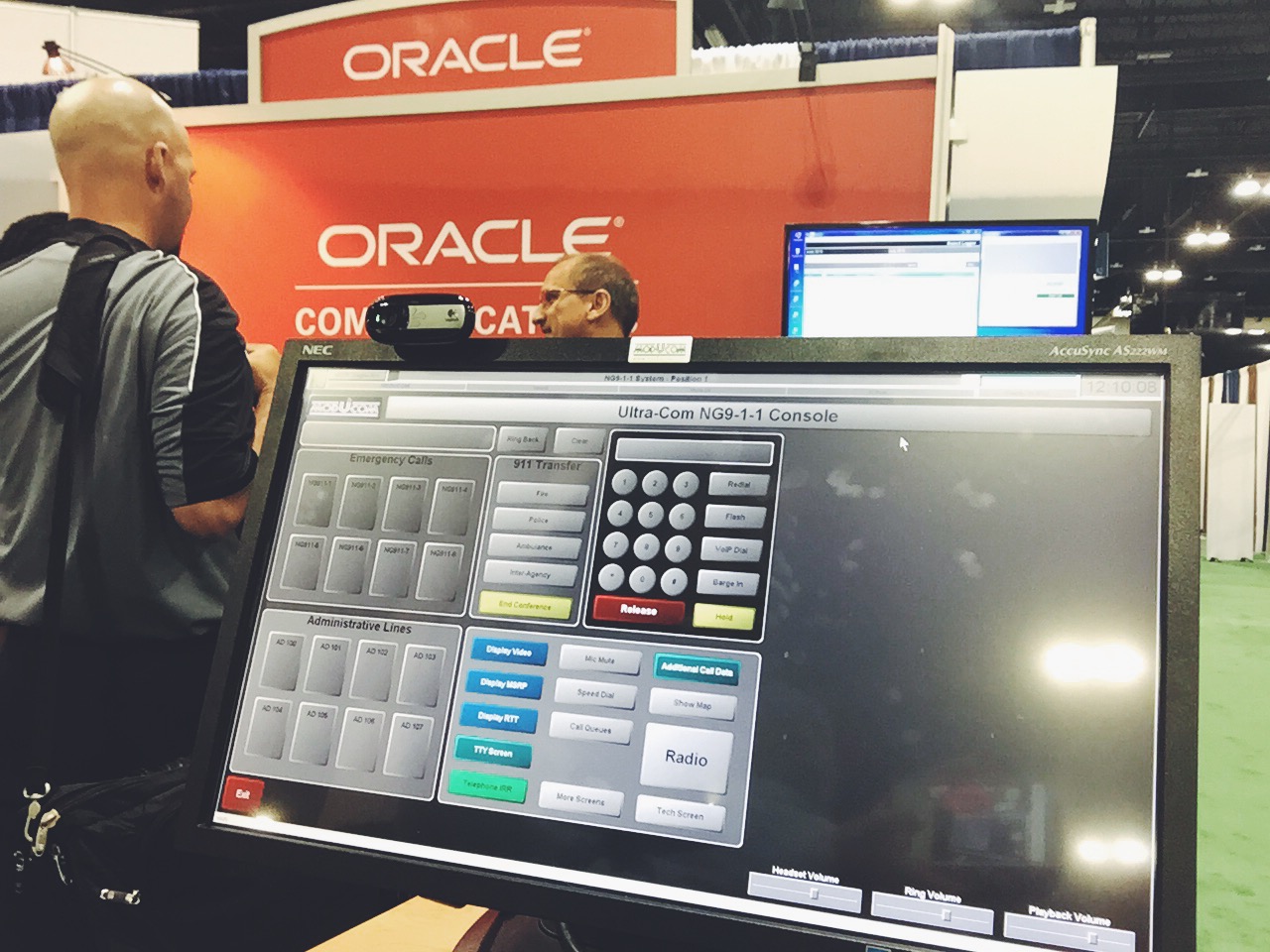 At the 2015 NENA Conference in Denver, CO, ModUcom had the opportunity to team up with vendors Oracle Communications and Stancil Corporation to demonstrate the importance of interoperability between multiple vendors under NextGen standards. There were two demonstrations, recorded by Donny Jackson of UrgentComm, in which all three vendors worked together to present NENA compliant features that will help PSAPs better serve the public. The first demonstration showed how a NextGen9-1-1 platform could be used to patch and transfer a text-to-9-1-1 to a first responder after a dispatcher disconnects. In the demo, Kevin Pitts of Oracle Communications represents a citizen of Denver who needs urgent help and has texted to 9-1-1. The message is instantly received on ModUcom’s Ultra-Com NG9-1-1 screen by Walt Jones of ModUcom, who acts as the receiving dispatcher. Seeing that the call was outside of the PSAP’s jurisdiction, the dispatcher alerts the citizen that the call would be transferred, and proceeds to transmit the call to the local PSAP who begins text correspondence with the citizen. The Ultra-Com program is able to see the conversation between the officer and citizen, and with Oracle bridging the call, can release the call without killing the connection. In the meantime, the Simon Farrow of Stancil Corp. utilizing the Stancil recording device is able to record the entire conferencing session. In addition to recording MSRP messages, Stancil can record both video and audio messages as well. The important takeaway for this demonstration is that by following the NENA standard, any device is able to connect to 9-1-1 and can release the call without disconnecting.  Furthermore, the transfer feature can be used on both NextGen and legacy equipment. See the video here. The next demonstration displayed a denial-of-service (DoS) attack on a PSAP and how PSAPs can appropriately combat the attack. A DoS attack occurs when someone tries to flood an IP address or contact center with packets or a wave of calls in order to take down a network. When a DoS attack takes place, operators are unable to take any calls and therefore cannot serve the public. When a flooding occurs, call centers are forced to disconnect the entire network in order to prevent the calls which causes the system to shut down for several minutes, thus preventing genuine callers from reaching dispatchers. The DoS options demonstrated in the recording has the capability to stop the flood within 5 to 10 calls. This particular demonstration shows a dynamic DoS feature in border control elements, which can help cell centers identify, manage, and shut down attacks in order to get the center running efficiently again. When the attack begins and floods the call center, the Ultra-Com screen lights up, and the dispatcher attempts to pick up each call and release it. Again, Kevin Pitts contacts the PSAP via text-to-9-1-1, which is seen on the Ultra-Com NG9-1-1 screen, but fails to get patched through. Pitts then turns on the Oracle solution border control element which quickly identifies the flood and turns it off. With border control element on, the operator can put the original call on hold, and begin to release flood calls and manage them. See the full recording here. Some may wonder whether or not there is a risk when using this feature, as to the possibility of cutting off a legitimate caller. In this case, the risk is very low because the border control element quickly identifies and manages attacks in order to restore service levels as fast as possible. This feature can be an important tool for operators looking at IP networks and deploying NextGen 9-1-1 networks. When you’re ready to update your PSAP, ModUcom’s innovative Ultra-Com IP can help you transition with little to no cost. PSAPs already using the Ultra-Com are eligible to receive free software upgrades and technical support for the entire life of the system. As the public safety community transitions to NG9-1-1 standards, it is becoming imperative that PSAPs begin to consider updating their equipment in order to maintain high levels of service. Are you ready for NG9-1-1?
Contact Us
Download Brochure