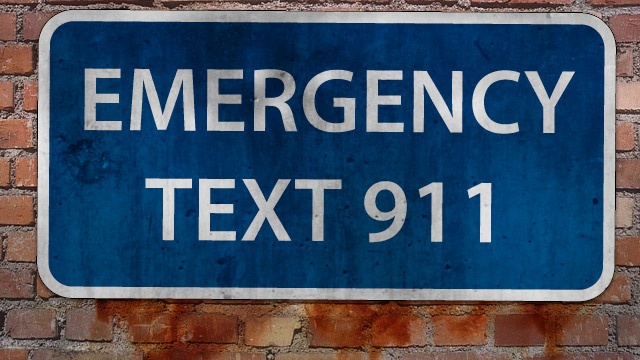 We live in a culture where advanced technology is a part of everyday existence, where cars are controlled by computers, and where your cellphone manages all aspects of your life. There are over 300 million connected wireless devices in the US and since 2008, over six billion text messages have been sent and received. When the majority of American adults communicate via text, why don’t our public safety systems reflect that? Studies show that over 52% of Americans believed that they could access 9-1-1 through text, when in reality only select locations in the US have just begun deploying this new capability in 2014. The process of delivering text messages to PSAPs began with a commitment by the four major US carriers—Verizon, AT&T, Sprint, and T-Mobile, as well as through support from NENA and APCO. PSAPs that embrace the interim SMS text-to-911 solutions have direct access to the millions of mobile users, deaf and hard of hearing, and speech impaired, preventing unnecessary delays in emergency communication. In 2013, the Alliance for Telecommunications Industry Solutions (ATIS) and the Telecommunications Industry Association (TIA) developed a joint standard called the J-STD-110, which describes the requirements, architecture specifications, and procedures of text messaging to 9-1-1. The standard provides technical information for use by system integrators, engineers, and wireless service providers. It describes three methods of transmitting SMS messages for PSAPs with current generation and NG9-1-1capabilities. If a PSAP would like to receive text messages, it must decide which of the three methods it would like to employ and submit a request to its wireless service provider. The three options are as follows and will be discussed further below: Currently, only simple text messages can be delivered to PSAPs. In the future, PSAPs nationwide will be able to receive multimedia calls containing audio, text and video in addition to enhanced data relating to the call, the caller and the caller’s location. In the meantime, the interim text-to-911 solutions are being deployed by many PSAPs scattered throughout the US.

Text messages from wireless subscribers are routed through a SMSC (short message service center) to a TCC (text control center) which receives location coordinates of the subscriber from the appropriate wireless carrier. The TCC then determines which PSAP to route the call to, based on the subscriber’s location. The TCC also determines the method of call delivery based on the delivery method requested by the destination PSAP. The three methods of call delivery are: NENA i3 PSA

P – SIP/MSRP Method Of the three text-to-911 delivery methods currently being deployed today, this is the only method that is approved in the forthcoming NENA NG9-1-1 i3 standards. This is typically considered the most effective option because it optimizes PSAPs’ capabilities for the NG9-1-1 evolution. The i3 based system lets PSAPs receive text messages on the same interface as voice calls, which allows for flexibility and ease of use. This solution is cost effective because the ability to use the same user interface negates the need for additional monitors, keyboards, and most importantly, call taker training. PSAPs utilizing the SIP/MSRP method will be able to locally record the transcript of text-to-911 calls as part of the call detail record on their NG9-1-1 capable logging recorder and Management Information Systems (MIS) as these systems become available in the near future. Transitional HTTP/Web Browser Method This solution allows text messages sent to PSAPs to be received via a dedicated network connection or the public Internet. The transport protocol used to convey text messages is the Hyper Text Transport Protocol. This requires call takers to use a web browser in order to handle text-to-911 calls. If the existing PSAP CPE does not have support for an integrated web browser or if there is insufficient space on the existing call taker’s screens, additional computers, monitors and keyboards will be required in order to answer text-to-911 calls. The workflow and procedures for handling text-to-911 calls using a web application are significantly different than handling text-to-911 calls using the other two methods. This means that there are likely to be significant costs incurred by the development of new PSAP operational procedures and call taker training. The ATIS J-STD-110 standard does not specify detailed functional requirements for this method of text-to-911 call delivery. Providers of TCC systems will therefore have systems that vary in both capabilities and user interfaces. This may not be an issue if the PSAP receives text-to-911 calls from a single TCC vendor. However, different wireless carriers may be linked to different TCCs, and it is possible that dispatchers will have to look at different web browser displays for each TCC vendor. Legacy TTY Method 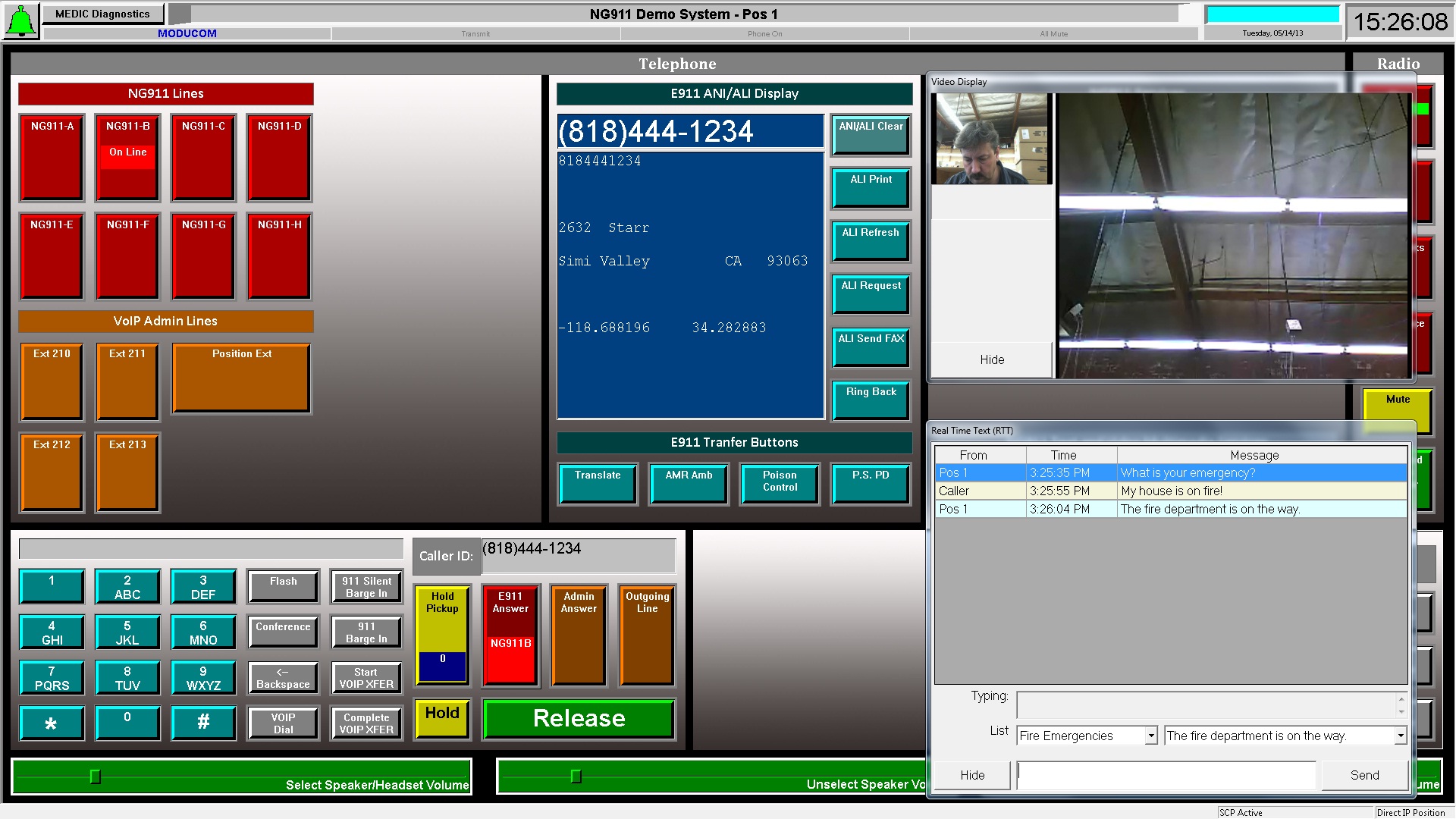 TTY has been used by the deaf and hard of hearing to call 911 for many years. All existing legacy PSAP CPE systems support TTY. If this is the method that is selected for delivery of text-to-911 calls, the TCC converts text messages to Baudot tones which are sent to the PSAPs’ existing CAMA trunks. Although this option requires no upgrades or additional costs, it is not seen as a permanent NG9-1-1 solution. It is limited in scope, and does not allow simultaneous messages between the caller and the call taker. Furthermore, this solution has a limited character set and noise as well as poor signal quality can potentially garble messages, leading to costly delays and confusion between communicators. Text messaging can be very slow at times so text-to-TTY calls can also tie up call lines for extended periods of time, preventing other callers from getting through to the PSAP.

PSAPs using the NG9-1-1 Ultra-Com system from ModUcom, can receive text-to-911 using the NG9-1-1 SIP/MSRP protocol. When a text-to-911 call arrives at the PSAP, call takers are notified with the same audible and visual indicators used for E911 or audio NG9-1-1 calls. The process of answering a call is identical for all types of calls. Once the dispatcher picks up the call, the Ultra-Com software brings forward a dialog box displaying text messages from the caller, and allows the dispatcher to respond via text. The transcript of the call is stored in the database of the Ultra-Com 911 Server and can be easily viewed in the Call Detail Report for the text message call. 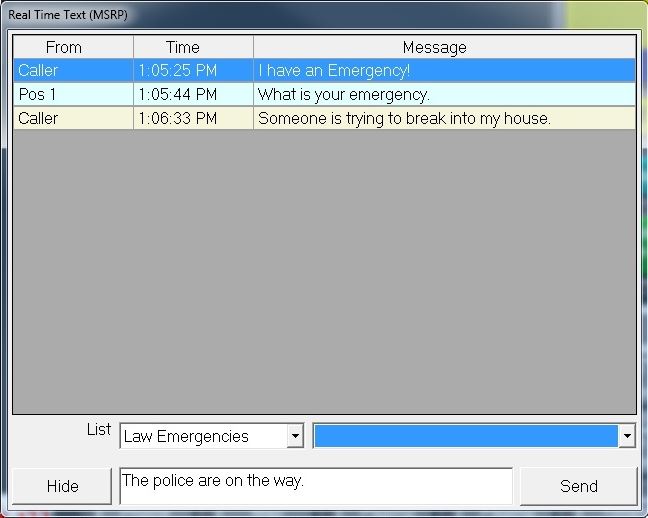 Dispatchers can send pre-programmed messages using the Ultra-Com software in order to reduce time delays between messages. The pre-programmed messages can be used in different combinations and can be organized intuitively. Unique to the Ultra-Com software is the Barge In function, which allows operators to “barge” into text-to-911 calls with the click of a button. The operator barging in will be able to see the entire transcript of messages sent between caller and operator. This function is practical for operators who are still in training and may need the assistance of the 911 supervisor.

APs throughout the nation have begun deploying text-to-911 solutions. As more and more PSAPs begin to adopt transitional text-to-911 solutions or migrate to the NG9-1-1 i3 architecture, it is important to emphasize when and how text-to-911 should be used. PSAPs that are already utilizing the text-to-911 solution should inform communities that texts should only be sent when it is not safe to make calls; for example, situations such as kidnappings, domestic violence, or home invasions. Texting can also be used during voice network overloads which can be caused by wide-scale disasters or regional power outages. Texting to 911 may also provide a usable alternative to calling in areas where cell phone reception is weak. Be aware that the SMS (Short Message Service) currently used by cell phone carriers in the U.S. does not have a guaranteed delivery mechanism in place. Therefore, text messages to 911 may occasionally be delayed or not be delivered at all. The motto of several PSAP public service announcements to their communities is “Call if you can, Text if you can’t.” For more information and guidance, NENA has published several resources available to PSAP managers. The FAQ for Interim Text-to-911 Solution provides insight for PSAPs on when and how to accept SMS text messages. Also worth noting is the PSAP Interim Text-to-911 Support Documents, which is a general training plan for PSAPs planning on utilizing the interim solution. Furthermore, NENA has published the document, Media and Public Q&A About Text-to-911, which includes commonly asked questions from the media that have been answered in plain English.

As PSAPs nationwide begin to migrate to a NENA NG9-1-1 i3 architecture, the text-to-9-1-1 function comes closer to becoming a permanent solution for our 9-1-1 system. Already, text-to-9-1-1 has become one of the most important capabilities in the Next Generation 9-1-1 movement, not only due to the way we communicate today, but to better serve the deaf and hard of hearing, as well as to maintain the safety of the public in situations where silence is necessary. The NG9-1-1 evolution is one of the greatest developments in modern telecommunications history, as well as one of the most necessary. As technology advances, it is imperative that communication systems evolve as well.
Contact Us
Download Brochure